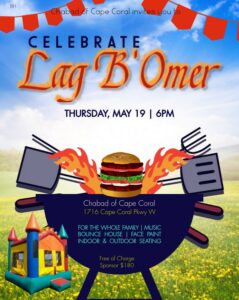 What Is Lag BaOmer?

Lag BaOmer, the 33rd day of the Omer count—this year, May 23, 2019—is a festive day on the Jewish calendar. It is celebrated with outings (on which children traditionally play with bows and arrows), bonfires, parades and other joyous events. Many visit the resting place (in Meron, northern Israel) of the great sage and mystic Rabbi Shimon bar Yochai, the anniversary of whose passing is on this day.

Lag BaOmer is always on the 18th day of the month of Iyar. So what’s up with the name? The word “Lag” is made of of the Hebrew letters lamed (ל) and gimel (ג), which together have the numerical value of 33. “BaOmer” means “of the Omer.” The Omer is the counting period that begins on the second day of Passover and culminates with the holiday of Shavuot, following day 49.

Hence Lag BaOmer is the 33rd day of the Omer count, which coincides with 18 Iyar. What happened on 18 Iyar that’s worth celebrating?

What We Are Celebrating

Rabbi Shimon bar Yochai, who lived in the second century of the Common Era, was the first to publicly teach the mystical dimension of the Torah known as the Kabbalah, and is the author of the classic text of Kabbalah, the Zohar. On the day of his passing, Rabbi Shimon instructed his disciples to mark the date as “the day of my joy.”

The chassidic masters explain that the final day of a righteous person’s earthly life marks the point at which all their deeds, teachings and work achieve their culminating perfection and the zenith of their impact upon our lives. So each Lag BaOmer, we celebrate Rabbi Shimon’s life and the revelation of the esoteric soul of Torah.

Lag BaOmer also commemorates another joyous event. The Talmud relates that in the weeks between the Jewish holidays of Passover and Shavuot, a plague raged among the disciples of the great sage Rabbi Akiva (teacher of Rabbi Shimon bar Yochai), “because they did not act respectfully towards each other.” These weeks are therefore observed as a period of mourning, with various joyous activities proscribed by law and custom. On Lag BaOmer the deaths ceased. Thus, Lag BaOmer also carries the theme of loving and respecting one’s fellow (ahavat Yisrael).

More about the holiday of Lag B’Omer Click Here

No products in the cart.